Excitement for the little ones

Access the website with the list of schools and tamborradas making up the children’s tamborrada drum parade, the special tamborradas that participate and the performance of our little ones.

Organised by different guilds, societies and cultural bodies, the Tamborrada was always made up of adults until, in the year 1927, following an experience with children from Zorroaga, the Euskal Billera Society, on the initiative of its President, Mauricio Echaniz, decided to organise a tamborrada featuring only boys, giving girls the role, in the same way as their female elders, of cantineras, standard bearers and the Bella Easo queen of the celebration. In this first version of the Children’s Tamborrada, with heralds and sappers, drum and barrel-players, the Drum Major was the young Alfredo Taberna.

They left at 11:00 in the morning and made their way through the streets of the Old Town, stopping to give concerts in the Boulevard and in the Plaza de la Constitución, to such great acclaim that the idea was repeated year after year in the same format until its expansion in 1961.

It was the month of October 1960 when the local press reported what was to be a complete revamp of the Euskal Billera Tamborrada, allowing the participation of hundreds of children distributed into companies and colourfully uniformed.

The meeting at which we could say that an agreement was reached on the rules for creation of the new Tamborrada was held on November 22 at the Centro de Atracción y Turismo, attended by: Ramiro Cebrián, on behalf of the San Ignacio school; Father Everardo Belba, the principal of Marianistas; Cayetano Ibaeta and Tomás Galindo, president and former president of Euskal Billera, Miguel Blasco de Imaz, Miguel Caravaca on behalf of the Hípica Society, Fernando Merino from the German school, and the councillor Ernesto Merino.

Among the agreements taken it was established that the participants would be colourfully and sumptuously uniformed, representing the Infantry, Artillery, Cavalry and Engineers “with uniforms in the old fashioned style”; that each school would participate with fifty children aged between 8 and 12 years. Being the founding Society, approval was given for the Euskal Billera company to head the parade, with the others coming behind it according to the seniority of their schools, followed by the municipal schools and, finally, any others incorporated in the future. The San Ignacio school asked to come last in the parade due to being an artillery company marching with canons, meaning that their progress would probably be somewhat slower than the others.

The final order of the first Children’s Tamborrada, with more than three hundred participants, was as follows: Standard bearers, Euskal Billera; General (Manin Caravaca) and Adjutant, Marianistas (a school founded in 1887), Escuelas Francesas (1898), Sagrado Corazón (1904) and La Salle (1947). The military music band followed by the companies from the Almirante Oquendo and Asilo Reina Victoria (Zorroaga) schools. For the reasons explained above, the parade was brought to a close at the rear by San Ignacio (1929). The Igueldo Ponies opened the parade and the lancers from the Hípica Society paraded as escorts for the carriage carrying the queen of San Sebastián (Blanca Orúe).

The development of the first edition of the Children’s Tamborrada had a series of anecdotes and comments which served to perfect the event in subsequent years.

Once all of the companies had gathered on the quayside esplanade, in front of Euskal Billera, the parade set off almost half an hour late due to the delayed arrival of the Municipal Corporation from mass in the Church of Santa María. The itinerary, which was too long, as is mentioned in the corresponding section, exhausted the children, and a prolonged stop in Alderdi Eder meant that those lining the streets along the way had a longer wait than expected. The participation of a single music band meant that it couldn’t be heard by all participants, who often lost the beat.

The uniforms were hailed a success, with emphasis on their colourfulness, although there was an obvious difference between the uniforms worn by those from private and municipal schools. 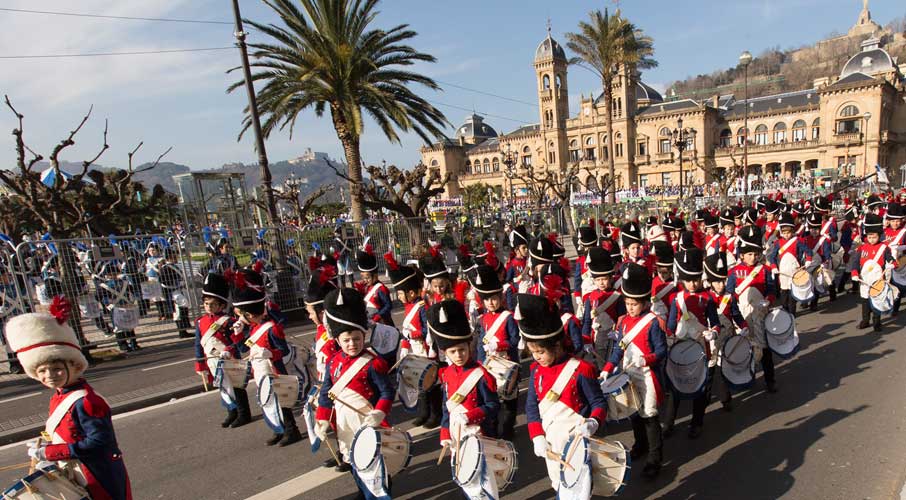 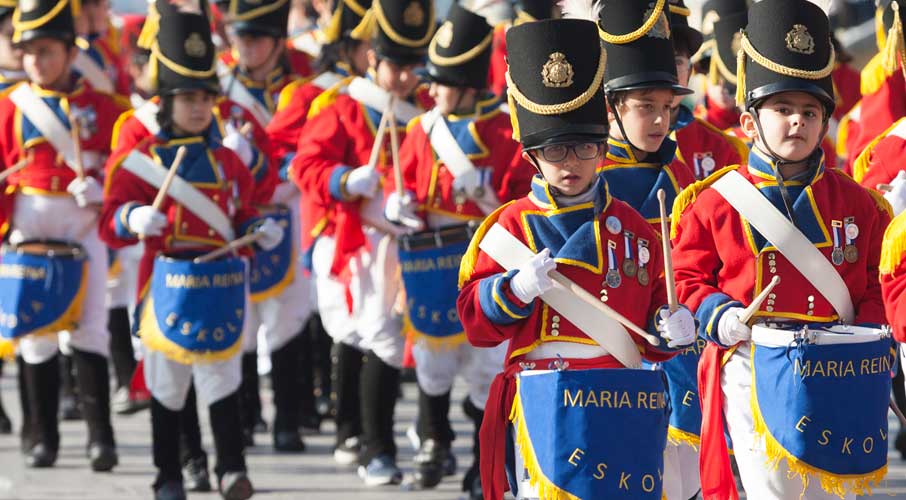 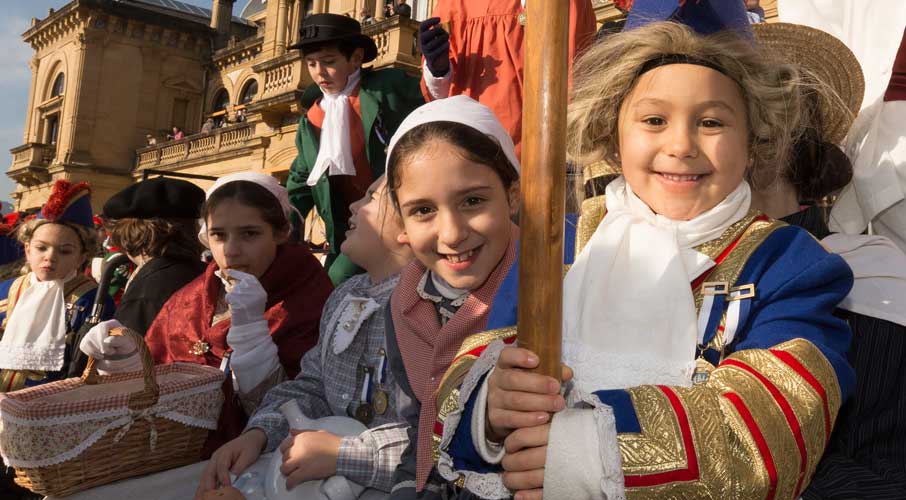 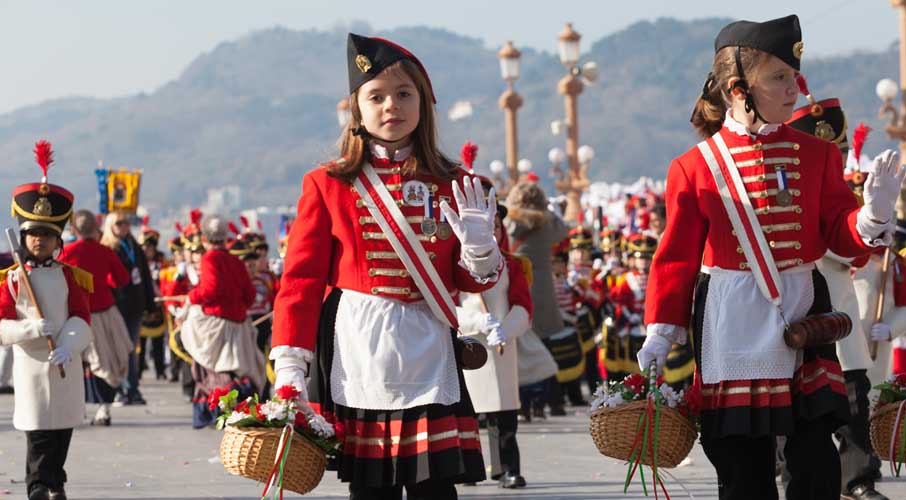 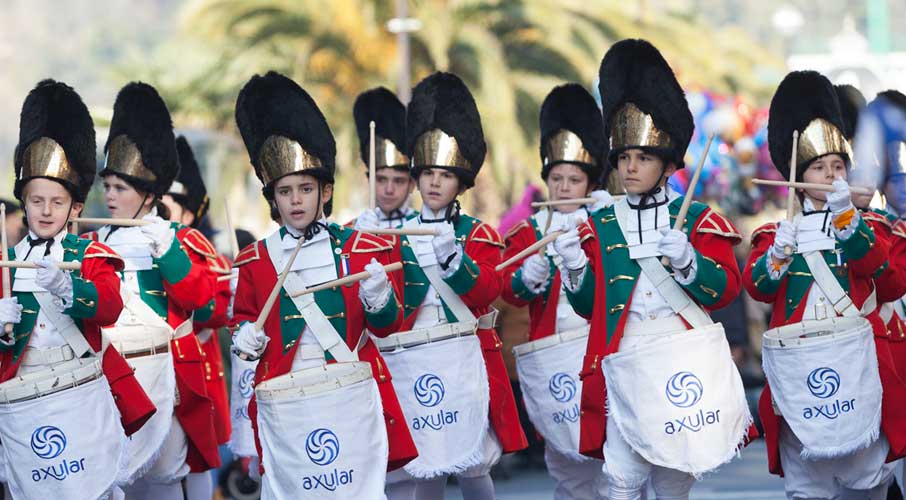 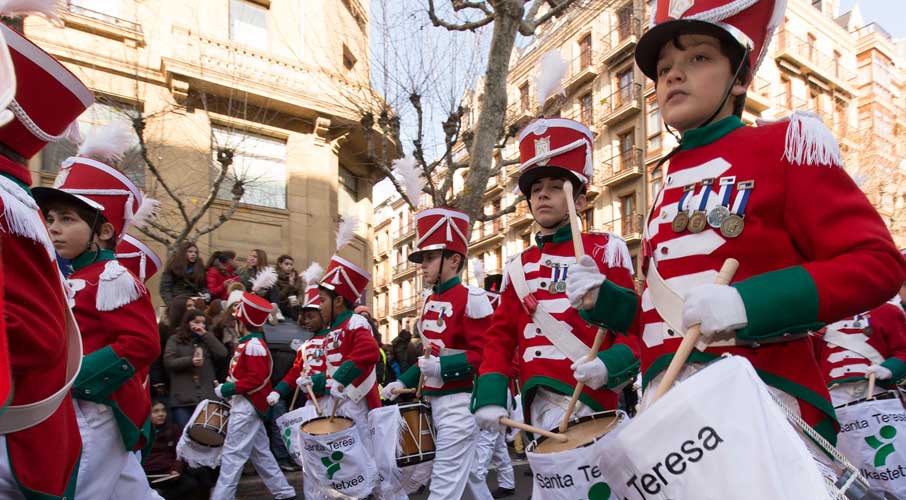 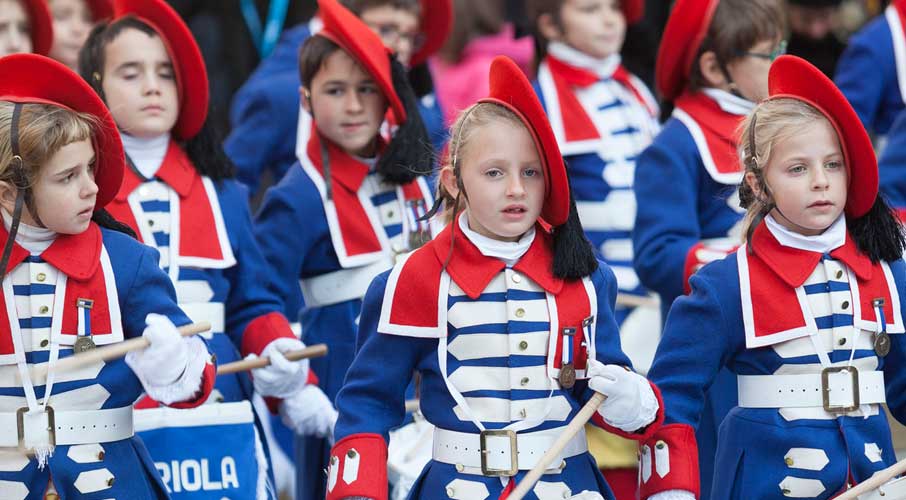 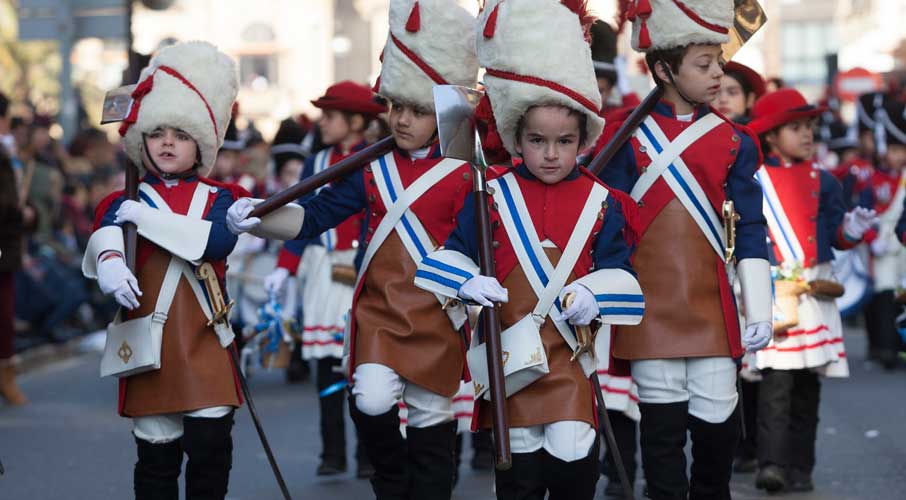 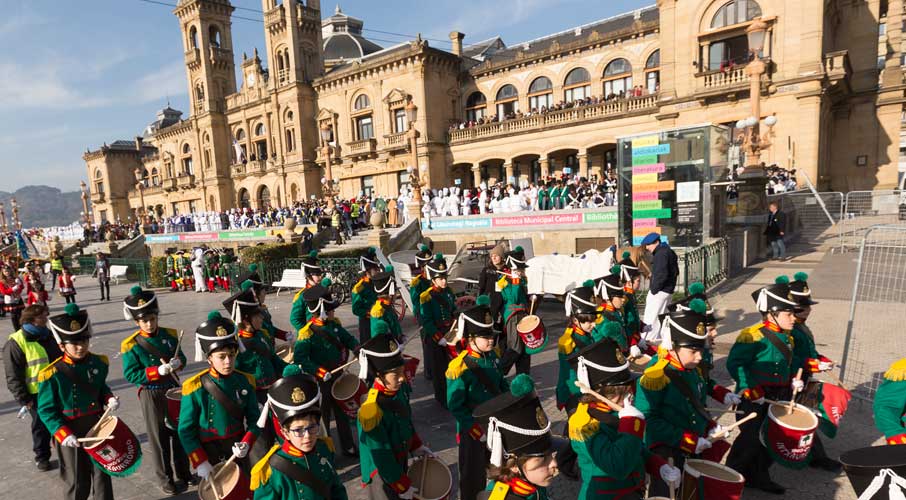 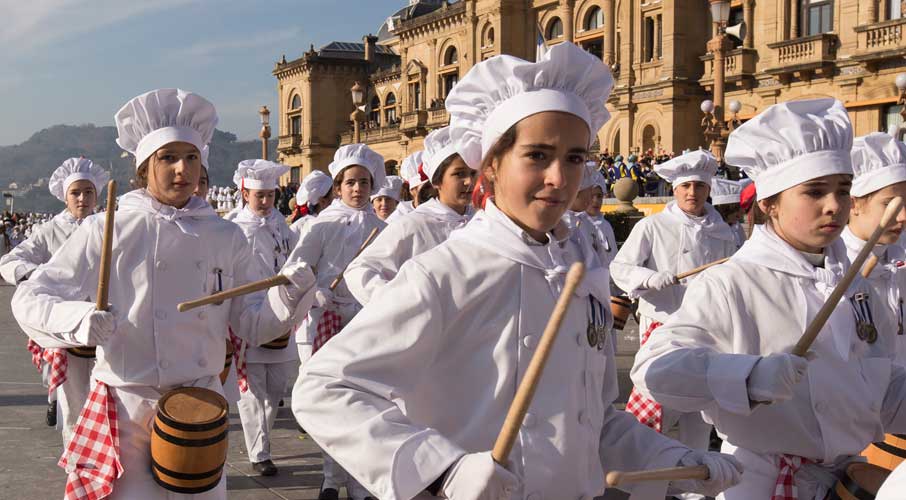 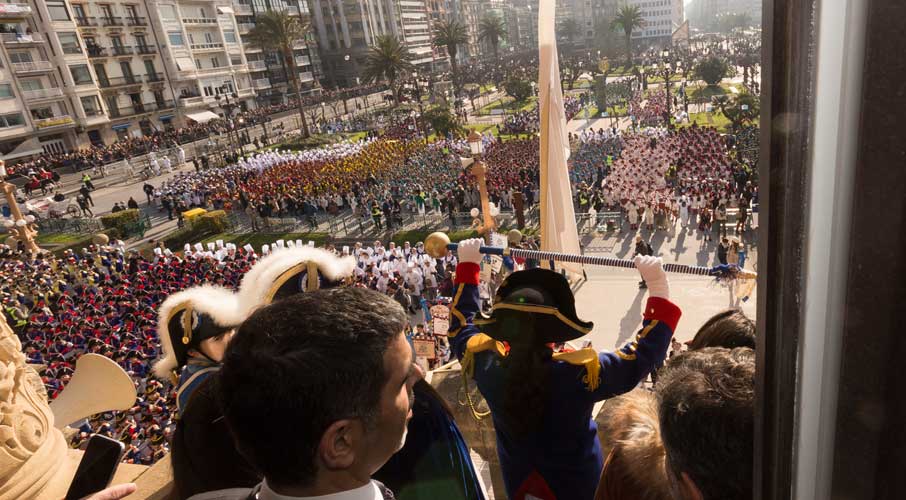 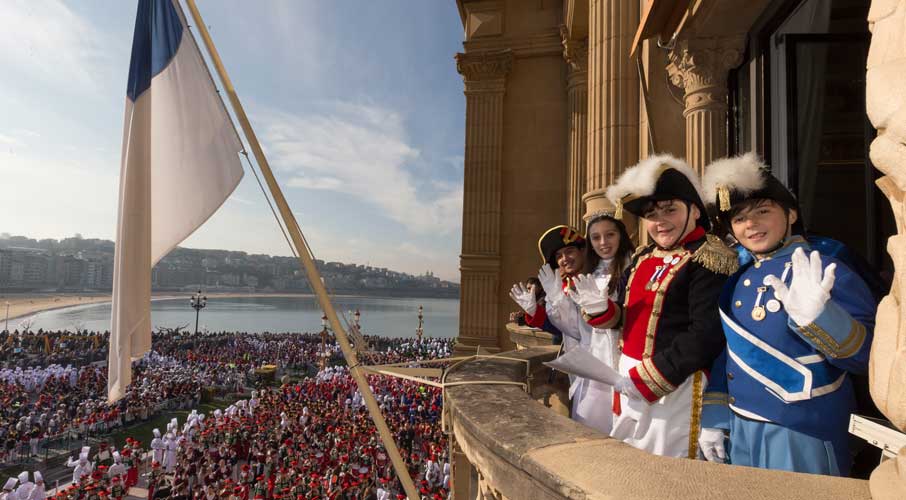 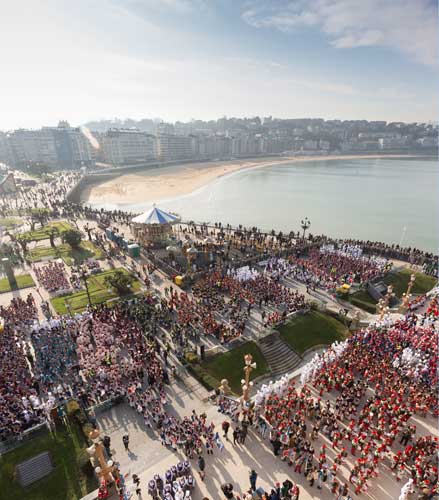 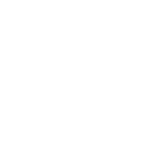 Join the celebration at...

The lowering of the flag