The history of a celebration

A fortified, walled city dominated by a military atmosphere, the chroniclers still say that every morning the troops would parade from the San Telmo Barracks to the Land Door, located in today’s Boulevard, to proceed with the changing of the guard. Some attribute its origin to the drumming of the firkins produced by the girls in domestic service and their escorts – skilled tradesmen and soldiers – while waiting their turn to draw water from one of the three fountains which, around 1836, supplied the city with water.

However, the most strongly advocated idea is the one claiming that the Tamborrada was born as a group of the San Sebastián Carnival in that same period, after which the tradition of celebrating the city’s patron saint’s day took shape with parading through the streets of the city in the early morning to the sound of a zortzico march by the maestro Santesteban, exclusively performed in those first years on barrels, to which loud drums were added at a later stage.

The participants, who would initially dress in outlandish costumes – hence the idea of its birth as a carnival group – later started to use uniforms.

They would go out every year, at 3:30 in the morning, from the “La Fraternal” Society situated on the way up to the Castle, to the beat of “Sheshenarena”, given that Sarriegui didn’t write the San Sebastián March until 1860. Untiring, they would continue their rounds of the streets until exactly eight o’clock, when they would stop at the corner of the Calles Iñigo and Narrica to wait for the sokamuturra or bull with a rope in its snout to appear.

The Tamborrada marked the beginning of the winter festive cycle, ending with the Burial of the Sardine on Carnival Tuesday. 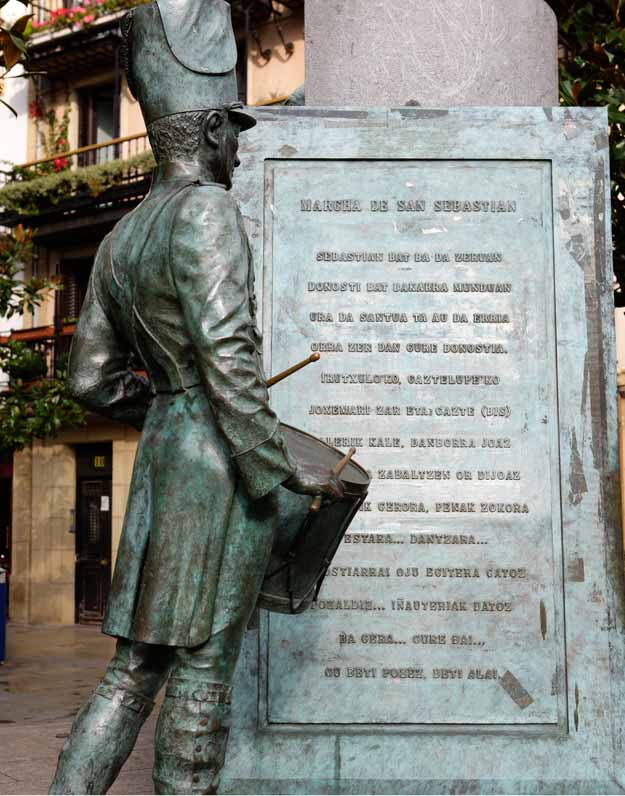 As the century advanced, the early popular compositions of the time (Urra Papito, Sheshenarena, old Iriyarena…) were joined by those written by the maestro Raimundo Sarriegui (1861), four of which were established as those which would traditionally, until 1965, the date when the Polka and Retreta were incorporated, make up the classic Tamborrada repertoire: the San Sebastián March, Diana, Tatiago and Iriyarena.

After the “La Fraternal” Society came the “Union Artesana”, founded in 1870, and which until 1956 would take to the streets at 5 a.m., opening its parade with three heralds on horseback, followed by uniformed drummers decked out as militiamen from 1800, playing skins and barrels to the sound of the marches played by the music band bringing the procession to a close. The Unión Artesana incorporated uniforms belonging to the Napoleonic wars, creating a custom which was continued by the bodies that gradually signed up as organisers of the celebration including, as they increased in number, uniforms, of rather fanciful design, used by the French, English, Spanish and Portuguese armies.

The cans and pieces of wood used in ancient times to participate in the Tamborrada were also replaced by drums, barrels and firkins (the bucket used by the women of San Sebastián to carry water) as a memory of that far-off San Sebastián in which the soldiers, in uniform, would bang their drums and the civilians, at that time dressed as bakers and today as cooks, would follow them as they went to and fro playing wooden buckets.

In 1906 the Euskal-Billera tamborrada was born, and it came to light in a special context, since that year the idea was that all of the tamborradas would take to the streets together. Thus, the “Unión Artesana”, “Club Cantábrico”, “Sporti Clai”, “Amistad Donostiarra” and “Euskal Billera” paraded through the streets of our city.

Since then, more than a century has passed and our tamborrada has taken gigantic steps in many aspects. From being a celebration of exclusively male participation, it has become an inclusive event in which anyone who wishes can take part in equal conditions, no matter what their gender. From being a celebration restricted to the traditional societies it has become a festive occasion that gathers people with shared interests, who are interested in a same subject... around a drum. A celebration in which boys and girls, young people and adults all have fun together.

Among the landmarks to have significantly marked the introduction of changes in favour of a more inclusive and egalitarian festive occasion, we can mention the following:

The first mixed tamborrada appears in 1980 when the Kresala Elkartea introduces the figure of the aguadora or water-carrier to their ranks, so that women can participate in the fiesta playing the “firkin”.

The first mixed tamborrada in which men and women play the same role sees the light in 1982 with Eskaut Gia: both men and women dressed as cooks play the drum and the barrel indistinctly.

In 1999, representatives of tamborradas from all over the city take part in the main official event of the celebration, the Flag Raising ceremony in the Plaza de la Constitución. From then on, the Flag Raising ceremony becomes the true start of the celebration in the city of San Sebastián, with the presence of two unquestionable protagonists accompanying Gaztelubide: that of the tamborradas from other areas of the city and that of the women who, from then on, will also become visible in the Tamborrada.

Today 147 tamborradas make their way round the streets of our city. Except for 13, all of them are mixed and the presence of women is increasingly numerous. 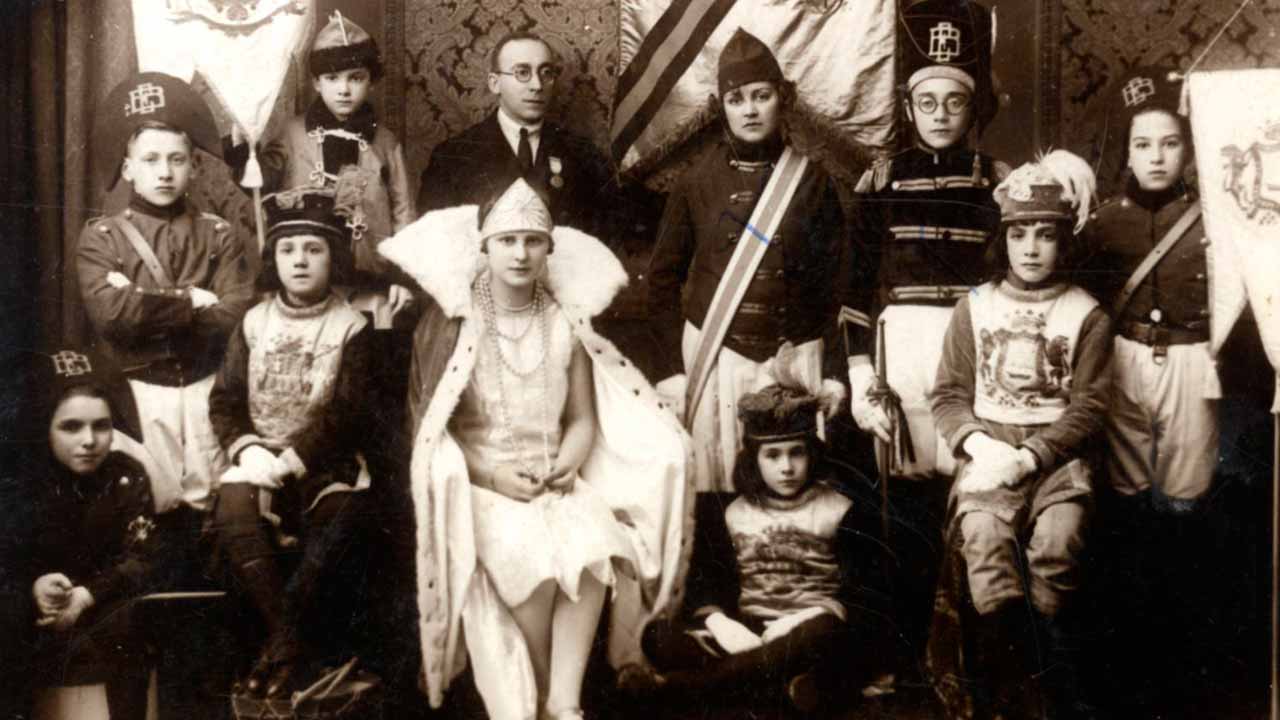 As far as the children’s tamborrada is concerned, they paraded through the streets of San Sebastián for the first time on 20 January 1927.

At eleven o’clock in the morning of that day, the Euskal Billera children’s tamborrada made its way to the Plaza de la Constitución where the children played the classic tamborrada marches, to the beat of the drums and barrels. The event was presided over by the authorities from the balconies of the Town Hall. The concert was repeated minutes later in the Boulevard music stand.

Following the forced parenthesis of the Civil War, 1936-1939, the parades begin again with equal brilliance, continuing until 1961, when a radical transformation takes place. Years later that primitive children’s tamborrada is increased in size and new companies are formed.

In November 1984, the Governing Board of the CAT tourist office approves the proposal made by schools to accept the participation of girls in the Children’s Tamborrada “provided that they conceal the details indicative of their sex (long hair and earrings)”. Thus, girls join the parade in 1985 playing either the drums and/or the barrels.

Anecdotes of the tamborrada

Due to COVID19 the Adult's Tamborrada is suspended again. The Children's Tamborrada is celebrated in five different neighborhoods of the city, complying with the established protocols.

COVID19 forces the suspension of the Donostia / San Sebastián's Tamborrada.

As there was only one General suit, the measurements of the chosen child did not correspond to that of the uniform, making it necessary to change the candidate.

Without optimal results, for the first time an attempt is made to sing the March of San Sebastián at the Alderdi Eder’s rally.

When the last Company left, the parade stopped to interpret the March of San Sebastián.

The Almirante Oquendo company finishes participating in Tamborrada;, being replaced by that of Biteri Zuhaizti.

It is agreed that this year the flag of the European Community will lead the parade.

In 1980 the first mixed tamborrada came out in which women participated playing an instrument. The precursor was the "Kresala" society that created the figure of the water carriers playing the herrada as a means of incorporating women into the festival.

The company called Zumalacárregui participates for the only time.

The ikurriña (flag of the Basque Country) was legalized on January 19, and it was taken to open the parade next to the flag of San Sebastián.

The Supply Company is created, made up of carriages that, pulled by donkeys, transport cannons and military supplies.

The Drum Majors, the Children's Queen and the General go to Sarriegui square, once the tamborrada is over, to inaugurate the monument in tribute to Sarriegui.

A Tamborrada Company goes to Centenario square to inaugurate the sculpture "Estela" by Ricardo Ugarte Zubiarrain.

Due to the state of emergency, the Tamborrada was suspended.

Along with the Company of Marianistas, a llama found in mountains near San Sebastián participates.

Perico Arana, promoter of the Children's Tamborrada, passed away and his name was given to the Company Escuelas del Antiguo.

To raise funds for the new companies, payment stands were placed on Hernani Street.

The public address system in the street, which had replaced the music bands, was abolished, placing loudspeakers behind each company. After the failure, it was returned to the previous system.

Five children from the Compañía del Amor Misericordioso , along with others from Vizcaya, visited Pope Paul VI at the Vatican. Carrying their flag and wearing their uniforms, they interpreted "Iriyarena" and the "March of San Sebastián" before the Holy Father.

The Children’s Tamborrada comes out for the first time in the format we currently know. About 300 children between 8 and 12 years old according to the following formation: Flag bearers, Euskal Billera, General and Assistant, Marianistas (school founded in 1887), French Schools (1898), Sagrado Corazón -Sacred Heart- (1904) and La Salle (1947) . Military music band followed by the companies of the Almirante Oquendo Schools and the Reina Victoria Asylum (Zorroaga). The San Ignacio school (1929) closed the tamborrada, which had requested it as it was an artillery company that carried cannons and its march could be somewhat slower. The Little Horses of Igueldo opened the march and the lancers of the Equestrian Society paraded, escorting the carriage of the queen of San Sebastián.

The Unión Artesana tamborrada, which until then left at 07:00 a.m. on January 20, changes its departure time to 10:30 p.m. and participates for the first time in the lowering of the flag.

In the press it is pointed out that the raising takes place again in Constitución square (July 18th square at that time) after a few years in which it takes place in Alderdi Eder after the transfer of the town hall on January 20, 1947.

The Tamborrada is suspended in the act of raising: “a strong and persistent rain forced Gaztelubide society to corner its drums and suspend the traditional celebration. The only tamborrada that accompanied the raising of the flag of San Sebastián was with a large orchestra (sic), with the accompaniment of thunders.”

The Tamborrada is resumed after the parenthesis caused by the Civil War.

The mayor Mr. Echauz, during dinner at the Unión Artesana society, urges those present to listen to the March of San Sebastián "standing up and with due attention on the part of those who hear it with the same or equal (sic) attention with which other marches or hymns are received”.

Prior to the day of San Sebastián, the mayor Mr. Paternina points out that this year only official tamborradas will be authorized and that "spontaneous tamborradas" which in some areas was called "bothersome" will not be allowed. That night, at the raising of Cosntitución square there were boos from the public to the mayor who was prevented from speaking properly and that the press attributed to the reason described above.

In the press of the time it was said that the Euskal Billera Tamborrada was going to "be filmed by an important movie house" with the help of the CAT (tourist initiatives office).

The Euskal Billera Children's Tamborrada comes out for the first time.

Written proof of the first flag raising in the Plaza de la Constitución.

The first tamborrada in the diaspora that we know of is celebrated in Buenos Aires.